Over the past century there have been a host of technological advances in the automotive world(like turbochargers) which have improved the efficiency of internal combustion engines (ICE), which, in turn has resulted in lower fuel consumption and less harmful emissions.

However, one of the most important developments has been that of the turbocharger which uses exhaust gases to drive a turbine to force air or a mixture of air and fuel into the engine to boost power. This has resulted in significant downsizing in engine capacity to achieve the same power output as a normally aspirated petrol or diesel engine. One of the major benefits of smaller, more efficient engines is better fuel economy.

Turbocharging can increase the power of a production car engine of similar capacity by 30 – 50% as it is more thermally efficient. It can also decrease fuel consumption by 2-6%, depending on driving technique.

In 2017, 27.6% of light vehicles sold in the United Sates were built with turbocharged engines, compared to only 5% in 2010, according to Wards Intelligence. The rise of the turbocharger was given a boost in Europe in the 1980’s when taxes favouring diesel fuel were introduced. This led to a diesel engine boom in passenger cars. Small turbodiesel engines delivered plenty of torque and offered excellent fuel economy, although limiting harmful emissions became a growing challenge.

Turbochargers are not a recent innovation. In fact, it goes back all the way to 1905 when a Swiss engineer, Alfred Büchi, the father of the turbocharger, was granted a patent for device that uses a radial turbine and axial compressor on a common shaft to force air into an engine’s cylinders using pressure from the exhaust gases to drive the turbine.

The first automotive use of a turbocharger was also pioneered in Switzerland, with the truck manufacturer Saurer using this device to boost power from a diesel truck engine in 1938. Subsequently virtually all diesel engines in trucks have been turbocharged.

General Motors was the first company to fit turbochargers to production cars, being the Chevrolet Corvair Monza and Oldsmobile Jetfire, in 1962. BMW rolled out its much vaunted 2002tii in 1973 and the following year Porsche released its 911 Turbo, possibly industry’s most iconic turbocharged car. Mercedes-Benz followed with the world’s first turbodiesel passenger car, the 300 SD, in 1978.

Over the year’s turbocharger manufacturers have invested billions of dollars in turbocharger research with one of the main aims being to make them reliable. That is a notable achievement when one considers the superheated temperatures in turbochargers, the high rotational speeds and accuracy of manufacturing required.

What is a turbocharger?

A turbocharger is a device mounted in the stream of exhaust gases exiting an engine after the combustion process. Today many of these units are integrated into the exhaust manifold. Inside the turbocharger housing are two finned wheels – think of the fan on a jet aircraft engine – mounted on the ends of a common shaft. One of the wheels, the turbine, is driven by the exhaust gases produced by the engine’s combustion process. On the other side of the shaft is the compressor wheel. As the turbine spins the shaft the compressor wheel turns at the same speed, drawing air into the turbocharger housing where it is compressed and fed into the engine. The denser air is compressed and forced into the engine’s cylinder where the compressed air and fuel mixture is combusted, raising the power output of the engine. The turbocharger shaft spins at very high speed: as much as 250 000 r/min depending on the size, wright of the rotating parts and type of use. (Source: Cummins) 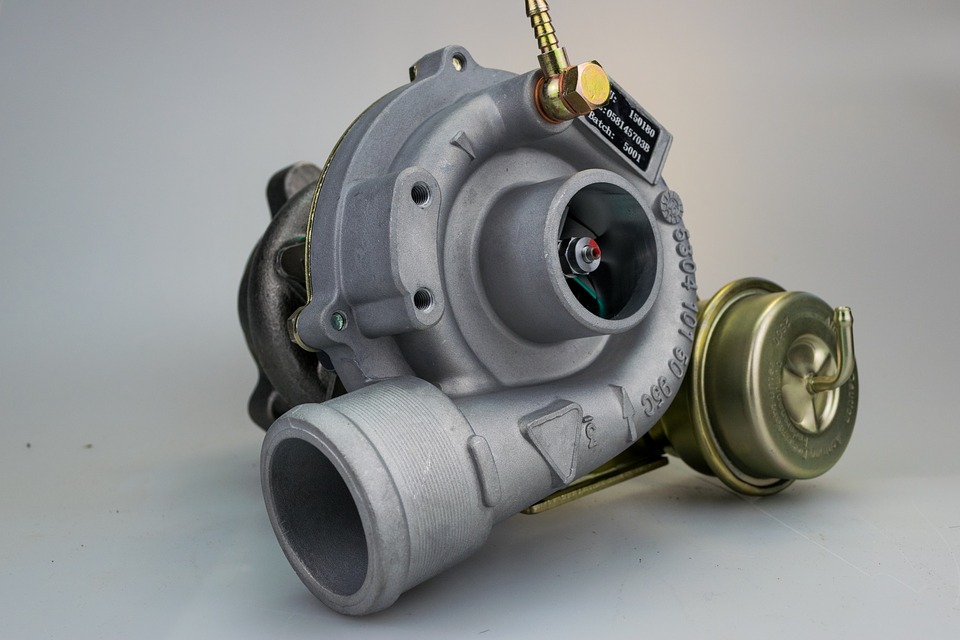 There have been many innovative improvements to turbochargers in the recent past which have improved both its performance and reliability.

The terminology and meanings include:

Boost: The amount of pressure (measured in Bar) a turbocharger exerts on the air it pushes into an engine’s cylinders.

Intercooler: The finned device – in appearance similar to an air conditioning condenser – used to cool the air and thereby increase its density to improve efficiency of a turbocharged engine. It is usually situated in front of the engine coolant radiator.

Sequential turbocharger: An engine that uses two turbochargers, one for low engine speeds and the other for high speeds.

Turbo lag: The time it takes for a turbine wheel to reach a high enough rotational speed to pressurise the cylinders and boost performance.

Variable geometry turbo: The flow of the exhaust gases to the turbine wheel is routed through different-sized vanes in the turbocharger housing to increase the efficiency of the turbocharger at low and medium speeds.